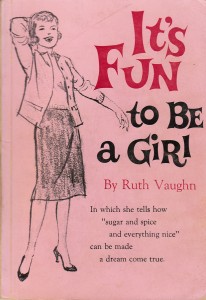 Along with the rest of the nation, I’ve been watching and enjoying Glee. And as a card-carrying lifetime member of the band geek club, it’s been bringing up all those lovely memories of the popular kids vs. the geeks “battles” that went on ~ most of you probably had some experience, whatever side you were on.

It’s been on my mind particularly as my 25th high school reunion approaches (I’ll be missing the festivities back in fun-city Punta Gorda, Florida, since its the same weekend of the opening of the play). Here’e some advice from Ruth Vaughn’s It’s Fun to Be a Girl, published in 1961, which alludes to the fact that musicians and artists can be popular too. Goody!

Popularity begins, not with making yourself important, but by becoming concerned and interested in other people. The result will bring happiness to you and others.

A group of girls were talking at a summer camp. One said, “It is so hard to maintain high standards and be popular.” Another girl spoke up, citing an incident where a girl with high ideals was crowned football queen.

“Sure,” the first girl remarked, “but she can play the flute, sing like a bird, and paint pictures. She can do almost anything. Most of us are not that talented!”

To be popular doesn’t require many talents. Everyone possesses at least one talent. The most important thing to do is to cultivate it. You play the piano? Develop it to the greatest popular capacity. You are pretty good with a tennis racket? Become very good. If your outstanding attribute is simply making friends and being a loyal, warm person ~ work at that. Being vastly talented is nice, but it certainly is not a requisite in this business of being popular.

Don’t try to be the best at everything. If Gail gives a reading which is a scream, don’t get up and try to compete with her or try to throw cold water on her praise. Add your part by getting a good seat to watch and applauding with all your heart for her talent. If Cheryl sings with such a radiance and warmth that it fills the entire room, don’t make a spectacle of yourself by trying to sing as well. Face yourself honestly and accept your own limitations. But develop and polish the talents which you possess.

Being the kind of girl who is popular takes self-discipline. The girl who has such a gay, appealing personality was not born that way. She learned to discipline herself pretty sternly because she knows the great rewards it brings.